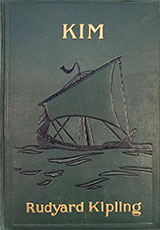 Story
The Man Who Would Be King

THE NOVEL | THE TEXT

The burden of reading Kipling's masterwork

If Rudyard Kipling were to publish his most acclaimed novel today, he would likely face more than the usual charges of colonialism and imperialism that have been levelled at him through much of the twentieth century. No doubt he would also be attacked for cultural appropriation in Kim, probably racism as well.

In this era it is hard to read some parts of Kim without cringing.

First, there's the whole idea of the titular character being a white lad passing for an Indian. In India. Fooling Indians.

What helps Kim pull this off in the novel's early going is his ragged clothing, his skin darkened by grime, and his colourful use of the local vernacular.

He's an orphan living by his wits in the streets and on the roads of England's colonized subcontinent, and he fits in perfectly. So much so that a local horse trader and agent for the British recruits him to carry secret messages.

Kipling uses Kim's adventures—including going on a mystical quest with a lama whom the boy obviously adores—to show his own love for the country and its myriad peoples. But it's hard not to get the feeling that Kim is special because, unknown to those around him, he is really English.

When Kim's heritage is discovered, he is pulled out of the roaming life and given an English education. In fact, he is turned into a spy, to become a player in what Kipling dubs the Great Game, the contention between England and Russia over subjugation of the Asian colonies.

"Subjugation", of course, is never a word Kipling uses in Kim. He frames the English contest with other powers as being a defence of India itself, rather than of one country's rule over another.

The novel was written around the time Kipling was also penning his empire-justifying poems, including the infamous "The White Man's Burden" (1899). He presents colonialism as a civilizing force, with the greatest burden of this task falling upon England. In Kim he does not explicitly endorse this project, but its acceptance is implicit in the narration.

To carry out his new assignment among the Indian masses, the cleaned-up and educated Kim again goes on the road as one of them. This time he acquires the native hue through the application of what today we would call blackface.

To Kim's and Kipling's credit, the boy does it out of love for Indians. He does not want to live as an Englishman but yearns to be back among the people. He returns to his beloved lama.

But some ambivalence continues to be built into the plot. Kim engages in his assigned intrigues while pretending to help the lama follow his quest. He misleads the innocent holy man into a long and dangerous detour off his path—in order to perform his own espionage exploits for the British.

Yet, when all the plot ends are wrapped up, we find the lama's quest has been fulfilled, although not as expected. His enlightenment, rather than leading to the merger of his individual being with universal consciousness, takes him back to his comradeship with Kim where he finds a different kind of salvation.

In the fatigue and sickness that follows his success at being an agent, Kim has his own breakdown and a sort of revelation:

He did not want to cry—had never felt less like crying in his life—but of a sudden easy, stupid tears trickled down his nose, and with an almost audible click he felt the wheels of his being lock up anew on the world without. Things that rode meaningless on the eyeball an instant before slid into proper proportion. Roads were meant to be walked upon, houses to be lived in, cattle to be driven, fields to be tilled, and men and women to be talked to. They were all real and true—solidly planted upon the feet—perfectly comprehensible—clay of his clay, neither more nor less.

Both Kim and his lama mentor choose human reality. This is about as profound as Kipling gets.

Perhaps that is unfair though. Kipling is a far more subtle writer—at least in his serious fiction—than the imperialist is usually given credit for.

His subtlety does not always work for a modern readership. Kim is narrated mainly through the exchange of dialogue that is vulgar (in the best sense of the word), full of colour, feeling and humour. But also full of meaning—shades of meaning found between the lines. The significance of what is being said openly can be lost when a reader is new to the culture or cannot pick up on the references. You can see in Kipling the seeds of Ernest Hemingway's iceberg theory of writing, leaving what is hidden below the surface unseen and unsaid, scarcely implied.

Throughout, Kim obviously appreciates—one could say loves again—the diverse, expressive, passionate and contradictory people of India. Kipling's simple but appreciative writing of the land and the people is enchanting.

As for his central character of Kim himself, Kipling never expends much energy in describing the boy's inner life. We get as much as we would ever get in any superficial Boy's Own kind of adventure, though Kim is so much more ambitious. Still it is difficult not to be caught up in the unravelling of the story.

At some point we have to say, yes, there are disturbing assumptions in this old novel, especially from our present-day perspective, but the contradiction Kim presents us is that we sense something else being said that is worth pondering.

THE NOVEL | THE TEXT