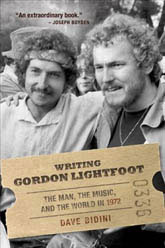 Writing Gordon Lightfoot: The Man, the Music, and the World in 1972

About that musical day in July

Broadcaster/musician Jian Ghomeshi has been in the book pages recently for his memoir, 1982, recounting a year as a teenager in the Toronto area. But something like this trick had already been turned by journalist/musician Dave Bidini, highlighting a period exactly one decade earlier.

Bidinis Writing Gordon Lightfoot, came out a year ago but caught my attention anew this fall when it made the shortlist for a Toronto Book Award.

For a music fan who was actually in Toronto in 1972, the book is nonetheless a revelation. Writing Gordon Lightfoot centres on the legendary Mariposa Folk Festival that took place on the Toronto islands that year, drawing the titular Canadian folk singer, as well as Bob Dylan, Neil Young, John Prine and Joni Mitchell among othersas either performers or guests.

I didnt latch onto Mariposa until a few years later, after the festival had adopted a policy of eschewing big-name stars, but I heard of that incredible year. I just didnt realize how incredible it had been.

Writing Gordon Lightfoot isnt just a star-worshipping love letter though. Much of the book is about what else was happening in the "world" of the subtitle The Man, the Music, and the World in 1972. A prison break and manhunt are followed. A nearby visit by Prime Minister Pierre Trudeau is reported. Team Canada is formed for the coming hockey summit series against the Russians. Famous and unknown Canadians go about their daily exertions. With a blend of a journalists skill and a novelists craft of weaving together strands that seem at first disparate, Bidini brings the era alive.

When it comes to the music-related parts of his story, he ranges over a wide period before and after the fateful July gathering on the islands. Its almost a road trip through popular music history in Canada. An enjoyable stopover is made at Torontos Varsity stadium to go behind the scenes at another equally famous music fest, the 1969 rock and roll revival, where John Lennon, Little Richard and Chuck Berry mixed it up, putting this country and city on the global musical map, setting the precedent for Mariposa in 1972.

Plowing on without Lightfoots cooperation, Bidini works the mans personal story  speculating at times on his experiences and even his inner life  into the larger story of how it all came together with Gord, Bob, Neil and the rest playing (not necessarily music) on the islands.

By the end of the story, you feel you know Gordon Lightfoot better than you could from other more straightforward accounts.

But its all entertaining.

Writing Gordon Lightfoot
Get at Amazon: US • Can • UK

Stranger Music: Selected Poems and Songs
Get at Amazon: US • Can • UK

The Stone Angel
Get at Amazon: US • Can • UK

My Financial Career and Other Follies
Get at Amazon: US • Can • UK