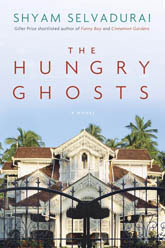 Feeding the ghosts here and there

You may not enjoy reading about Toronto seen by the family from Sri Lanka in The Hungry Ghosts. You might not even recognize Toronto in this novel. But you should probably read it.

Canadian literature is full of what is indelicately called immigrant fiction. And some of our most acclaimed writers continue to share residence between their native and adopted lands. Sri Lankan-Torontonian Shyam Selvadurai has joined their ranks with his previous works, including Funny Boy and Cinnamon Gardens, which were up for awards in the 1990s, but the latest novel may be his long-awaited breakthrough.

Usually such stories take place either mainly in the new world, showing the protagonists struggles to adapt to their new lives, or mainly in the old world, presenting their lives before the big move. In The Hungry Ghosts the experiences are almost exactly evenly divided between both locales, as members of the family move back and forth between their two lives. The drama springs from much more than geographical dislocation though.

The Rassiah family consists of widowed mother Hema, her daughter Renu, and son Shivan, the novels gay, first-person narrator. In Sri Lanka their existence is tenuous due to their mixed Sinhalese and Tamil blood putting them at risk from attack by both the majority and minority factions in the strife-torn state. Also oppressive is their need to placate Hemas wealthy, domineering mother who takes them in, while exacting a great emotional price. She especially pushes her favoured offspring, grandson Shivan, whom she trains in her business dealings.

At Shivans urging the family eventually escapes the matriarchs clutches to land in Canada. Thereafter follows what may be the most disturbing part of the story for local readers. Rather than blossoming in this land of plenty, in this multicultural paradise we call Toronto, the family is miserable. They end up in a small mouldy house in Scarborough near other impoverished Tamils. The city is a wastelanddull, unfriendly, uncultured. York University, which the siblings attend, comes under especially harsh criticism from Shivan as a faceless, concrete factory. Vancouver and UBC, where he ends up working, are more to his liking.

But during an extended visit to Sri Lanka the political, sexual and familial tensions plaguing the young man explode with tragic consequences that colour everything in the second half of the novel.

The villainess of the piece is the grandmother and what a tremendous character she is. Selfish, vindictive, even vicious, yet obsessed with Buddhist ideas of karma. Her self-serving tales, including one about haunting, reborn figures that give the novel its title, provide a mythological backdrop for her grandsons life. As much as a reader roots for Shivan and his family to get out from under her control, one cannot help but want to read more about her.

The one major disappointment of the novel may be its continued focus on the grandson. Shivan is an obvious stand-in for the author (as Selvadurai has admitted in interviews) and it is Shivan who most suffers the tragedy at the novels midpoint. But everyone has a story of suffering in The Hungry Ghosts and, really, the women sufferand prevailmuch more interestingly.

Shivans continual sulkiness starts to wear. And were never quite sure why he continues to act the way does, being cruel to his family, deriding everyone he meets, and destroying the one romantic relationship that would seem to offer him succour.

The ending, I suspect, will divide readers. There is resolution but its realistic, hence unsettling.

The ghosts are fated to remain hungry.

The Hungry Ghosts
Get at Amazon: US • Can • UK