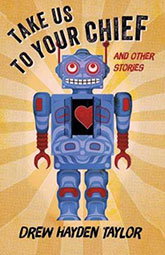 Take Us to Your Chief and Other Stories

Native science fiction looks back and to the future

Why has no one thought of this before? Science fiction from an aboriginal perspective.

After all, Canadas First Nations have actually had the first contact experience on their own soil. The notion of an alien invasion of their world is not exactly confined to speculative fiction.

Drew Hayden Taylor, better known as a playwright, recounts in an afterword to Take Us to Your Chief his attempts to get other Native writers to write science fiction for a proposed anthology. After much frustration (mainly to do with financing the project), he ended up just writing the stories himself.

We can only speculate how getting multiple Native perspectives would have turned out, but perhaps Taylors achievement will encourage future writers.

First of all, great title, isnt it? Somewhat undercut by a cheesy, grinning robot on the cover that might make the book seem aimed at little kids.

That misconception is banished by the first story, A Culturally Inappropriate Armageddon, in which an invasion from space is heralded by a reserve radio station. From here the stories move through various science fiction tropes  space travel, time travel, artificial intelligence as well as some re-imagining of aspects of native culture, such as petroglyphs and religious beliefs.

The stories are what I think of as naive science fiction  harking back to Golden Age sci fi tales and old B-movies  rather than more sophisticated stories of recent decades. Fans might expect from a Native writer denser, more environmentally conscious, psychologically driven material similar to that of, say, Ursula K. Le Guin or J.G. Ballard. They would be disappointed. But maybe they would realize this is where Native science fiction has to start: with the basics.

And in its naivety, its quite engaging  even when the subject is rather dark or pessimistic.

The centrepiece of the collection, to my mind, is Dreams of Doom. An Ojibway journalist uncovers a government plot to spy on people and control them through  mass-produced dream catchers. This is far-fetched of course, but not as paranoid as it may first seem. After reading the story, I looked up more information on the webbed artefacts and found that indeed there is concern that their manufacture is considered exploitative and destructive of Native culture. There is a real-life warning in this fictional premise.

I think  I hope  Taylor has started something here.

Take Us to Your Chief and Other Stories
Get at Amazon: Canada