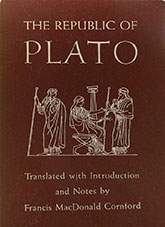 I went down yesterday to the Piraeus with Glaucon the son of Ariston, that I might offer up my prayers to the goddess (Bendis, the Thracian Artemis.); and also because I wanted to see in what manner they would celebrate the festival, which was a new thing.

Admitting that women differ from men in capacity, do not men equally differ from one another? Has not nature scattered all the qualities which our citizens require indifferently up and down among the two sexes? and even in their peculiar pursuits, are not women often, though in some cases superior to men, ridiculously enough surpassed by them?

I really do not know as yet, but whither the argument may blow, thither we go.

...any musical innovation is full of danger to the whole State, and ought to be prohibited.

Those then who know not wisdom and virtue, and are always busy with gluttony and sensuality, go down and up again as far as the mean; and in this region they move at random throughout life, but they never pass into the true upper world; thither they neither look, nor do they ever find their way, neither are they truly filled with true being, nor do they taste of pure and abiding pleasure. Like cattle, with their eyes always looking down and their heads stooping to the earth, that is, to the dining-table, they fatten and feed and breed, and, in their excessive love of these delights, they kick and butt at one another with horns and hoofs which are made of iron; and they kill one another by reason of their insatiable lust. For they fill themselves with that which is not substantial, and the part of themselves which they fill is also unsubstantial and incontinent.

Thus shall we live dear to one another and to the gods, both while remaining here and when, like conquerors in the games who go round to gather gifts, we receive our reward. And it shall be well with us both in this life and in the pilgrimage of a thousand years which we have been describing.

The philosopher who would be king

It is hard to know how to classify the philosophical classic Republic, or any writing by Plato, as literature. Or to know even whether it is a literary work.

It's published writing, so it is literature in the broadest sense. But does it deserve a place among the novels, stories, plays and poetry we consider creative literature? Or is it just a philosophical treatise?

Like most of Plato's works, Republic tells a story from his own time in ancient Greece. Nothing too dramatic. His teacher Socrates meets some friends and engages them in an argument that starts with debating the nature of justice and moves on to working out the features of an ideal society.

So there is a narrative of sorts. And the form of a dialogue does suggest a play. Though the dramatic elements of literary narrative and theatrical work are either missing or severely repressed. You can pick up a bit of plot and character development by highlighting the rise and fall of each of Socrates's hapless opponents in the argument, as the philosopher leads them on and then demolishes their efforts to be replaced by his own relentless reasoning.

But this is thin literary gruel. The other characters are obviously there as straw figures to help present Plato's own views as being reached through a dialectical method of thesis and antithesis.

Plato cannily adopts this highly readable style of exposition, rather than present his views in essay format. Being related as parts of a story, they are more digestible for the reading public. This presentation in popular literary form—however superficial the literary characteristics may be be—must have something to do with why, a couple thousand years later, we are more familiar with Plato's philosophical arguments than those of any other thinker from or since his era.

The popularity of Republic far above any of his other works also has to do with its subject matter, no doubt. The book is often cited as the first utopian vision in literature, a precursor to several ancient works and in the modern era to Thomas Moore's Utopia, Samuel Butler's Erewhon, B.F. Skinner's Walden Two, Aldous Huxley's Island, and literally hundreds of others, plus even more dystopian works. How we should organize the society in which we live is an endlessly interesting question for us.

Plato approaches the topic differently, however, from most of his more literary successors. He draws on little empirical evidence, except to criticize existing forms of government, and uses his dialectical method to develop an alternative built entirely on reason. And who, we ask, is to reign as king in the so-called republic created in thought by the philosopher? A philosopher, of course.

The society he envisions has been criticized as being fascist. In answer to that charge, Plato's defenders point out that his philosopher-king—in opposition to the tyrant who rules through force and oppression—is raised and educated to be wise, just, good and capable of facilitating the organization of all citizens into an harmonious whole. Everyone else sticks to the work for which they are suited to and for which they have been trained.

Some others have claimed that Plato is not really advocating that such a society be developed, nor that he thinks it could even happen. Rather, it is said, he is using the debate on the form of the ideal state as an exercise in reasoning for his students. This would explain why the whole process of creating such a state based on an understanding of wisdom and an analysis of the human soul seems so impractical. Really, does anyone living in the real world think political, social and economic structures could come about in such fashion? Or if such a philosopher-ruled republic could be realized, it wouldn't immediately be overthrown by other real-world forces?

To be fair, I have heard some philosophers profess hopes for societies to be founded on purely intellectual principles. But no political scientists.

Shadows on the wall

So leaving aside the whole society-building project, what in Republic makes its reading worthwhile?

Along the way, Socrates and his companions hash out to their satisfaction the meaning of justice, the censorship of stories for children, the proper education of males and females, the regulation of reproduction, the communion of wives and children, and the composition of the individual psyche. Interesting, outside-the-box discussions. Readers today though are likely going to find the philosopher's conclusions to many of these issues as scary as his views on the ideal state.

In trying to answer these questions, Plato/Socrates creates analogies, allegories and myths that have taken on lives of their own distinct from the larger argument of Republic.

The most famous of these is known as "Plato's Cave", in which he imagines we are like people who have spent their lives chained in a cavern, watching shadows cast on the wall by objects behind us we cannot see. There's much more to the allegory as it is related, but this division into the phenomenal world we experience and a world beyond our senses has been influential. It has come up repeatedly in philosophy, most completely with Immanuel Kant.

For my money, these little stories and lessons within the larger arc are the most interesting literary elements of Republic.